The early arcade game cabinets, since the very first arcade games decades ago, were manufactured by a wide range of different companies. There was no real standard way of wiring up the insides of an arcade cabinet, so most companies just wired it in the way they wanted. Unfortunately, this means that almost every one of the early arcade machines has a different wiring configuration for connecting the game board to the monitor, coin slots, control panel buttons, etc. 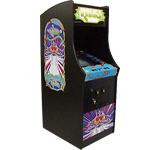 This presents a huge challenge if you ever wanted to swap a particular game inside an arcade machine out with a different game, as the wiring has to be re-worked for every specific game board.

A New Jamma Standard Starting around the mid-80's, a new standard way of hooking up the internals of arcade machines was created in Japan and it was named JAMMA (Japanese Amusement Machine Manufacturers' Association).

This new standard was adopted by most game companies that were manufacturing arcade games since it helped to simplify hooking up machines and reduced costs in swapping game boards to replace older games with newer ones. If you have a JAMMA-wired arcade machine, you can buy any JAMMA-compatible arcade game board and use it, simply plug-and-play.